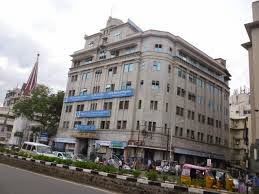 State Bank of Mysore(Kannada:ಸ್ಟೇಟ್ ಬ್ಯಾಂಕ್ ಆಫ್ ಮೈಸೂರು) is a nationalised bank in India, with headquarters at Bangalore. It is one of the five associate banks of State Bank of India.

This bank has 976 branches and 10627 employees (June 2014) and the Bank has 772 branches (79%) in Karnataka State.[4] The bank has regional offices in Bengaluru, Mysore, Mangalore, Mandya, Hassan, Shimoga, Davangere, Bellary, Tumkur, Kolar, Chennai, Coimbatore, Hyderabad, Mumbai and New Delhi. The bank's turnover in the year 2013-2014 was around US$19 Billion and Profit about US$46 Million.

The Bank has a record of uninterrupted profits since 1913 and has declared dividend every year since 1913.
Share this article :