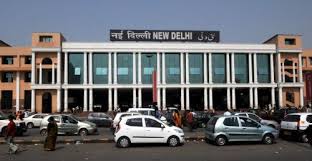 Most eastbound and southbound trains originate at New Delhi Railway Station. However, some important trains to other parts of the country also touch/originate at this station.

Before the new imperial capital New Delhi was established after 1911, the Old Delhi Railway Station served the entire city and the Agra-Delhi railway line cut through what is today called Lutyens' Delhi and the site earmarked for the hexagonal All-India War Memorial (now India Gate) and Kingsway (now Rajpath). The railway line was shifted along Yamuna river and opened in 1924 to make way for the new capital. Minto (now Shivaji) and Hardinge (now Tilak) rail bridges came up for this realigned line. The East Indian Railway Company, that overlooked railways in the region, sanctioned the construction of a single story building and a single platform between Ajmeri Gate and Paharganj in 1926. This was later known as New Delhi Railway station. The government's plans to have the new station built inside the Central Park of Connaught Place was rejected by the Railways as it found the idea impractical.[2] In 1927–28, New Delhi Capital Works project involving construction of 4.79 miles (7.71 km) of new lines was completed. The Viceroy and royals entered the city through the new railway station during the inauguration of New Delhi in 1931. New structures were added to the railway station later and the original building served as the parcel office for many years.
Share this article :